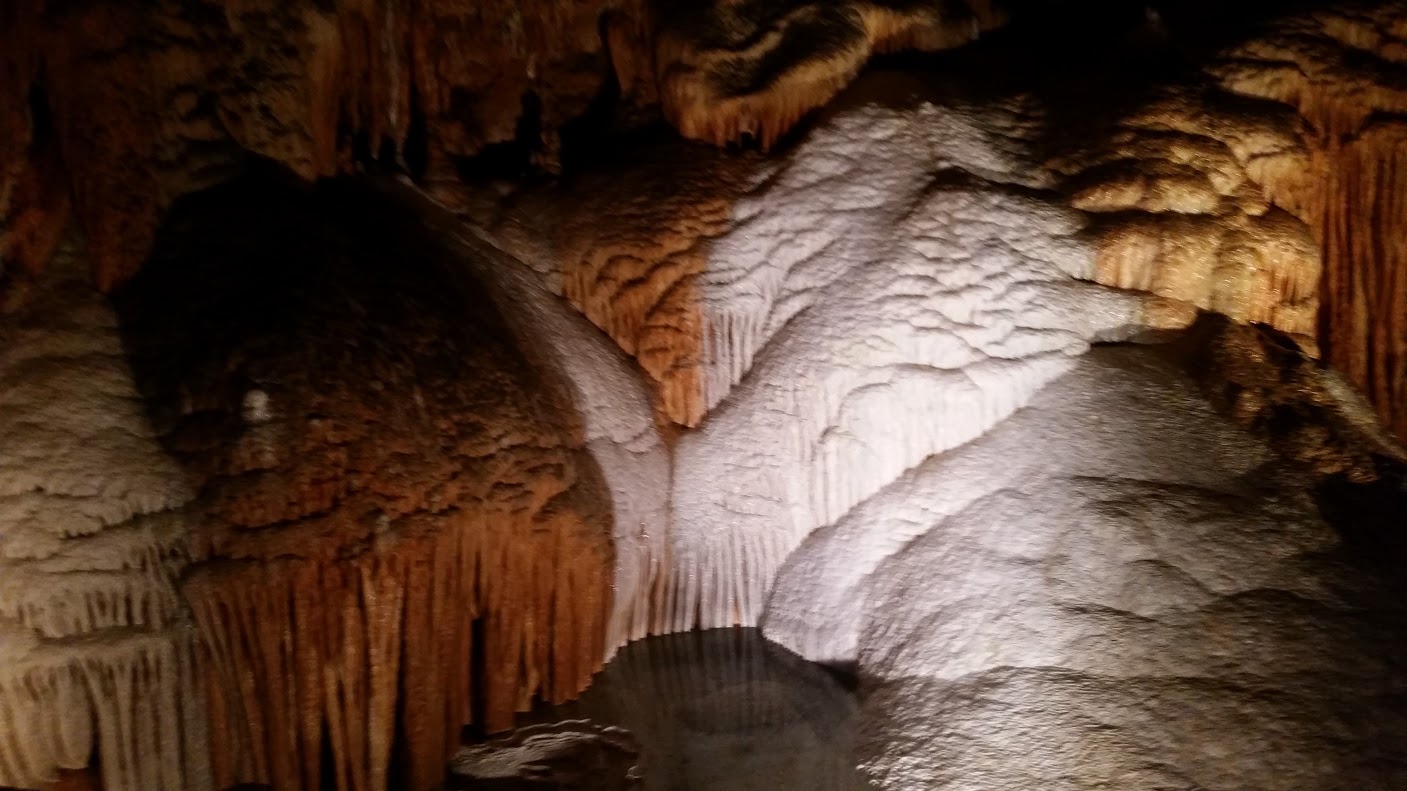 Onondaga Cave is located along the banks of the Meramec River. It is a half hour drive from Meramac State Park, down I-44. The park entrance is on state highway H. Exit I-44 on to state highway H, and drive through Leasburg, MO. Take Highway H all the way to the entrance to the state park. From St. Louis, Onondaga Cave is an hour and a half drive south on I-44.

Onondaga Cave State Park is located right on the banks of the Meramec River. This means it is prone to flooding! As such, the campground will close due to weather and flooding risk. Be sure to check the park’s website for any advisories, or contact the park staff.

Onondaga Cave State Park has 19 basic campsites, and 45 premium campsites, which include an electric outlet and water. Each campsite has a concrete parking pad next to it to park your vehicle. Additionally, there are 3 accessible campsites. If you stay in a basic campsite, there is water available at the showerhouse. The showerhouse has bathrooms, sinks, and showers, and is open seasonally (April through October). Firewood is available at the Visitor’s Center for Onondaga Cave. You pass the Visitor’s Center on the way to the campground, and it is a short drive, but it could be a long walk, especially if you are carrying firewood. Occasionally, the main road connecting the campground to the Visitor’s Center floods, and if it does, there is a longer way around the main road to get to the Visitor’s Center. The campground starts with the basic campsites right along the Meramec River, and extends away from the river, with the premium sites located further from the river.

The Blue Heron Trail is a short easy trail that leads from the campground to the visitor center and the entrance to Onondaga Cave. The trail is half a mile long on paved and wooden road. The trail takes you through some pretty, lighly wooded, areas and follows along part of the lake in the park, Spring Lake. 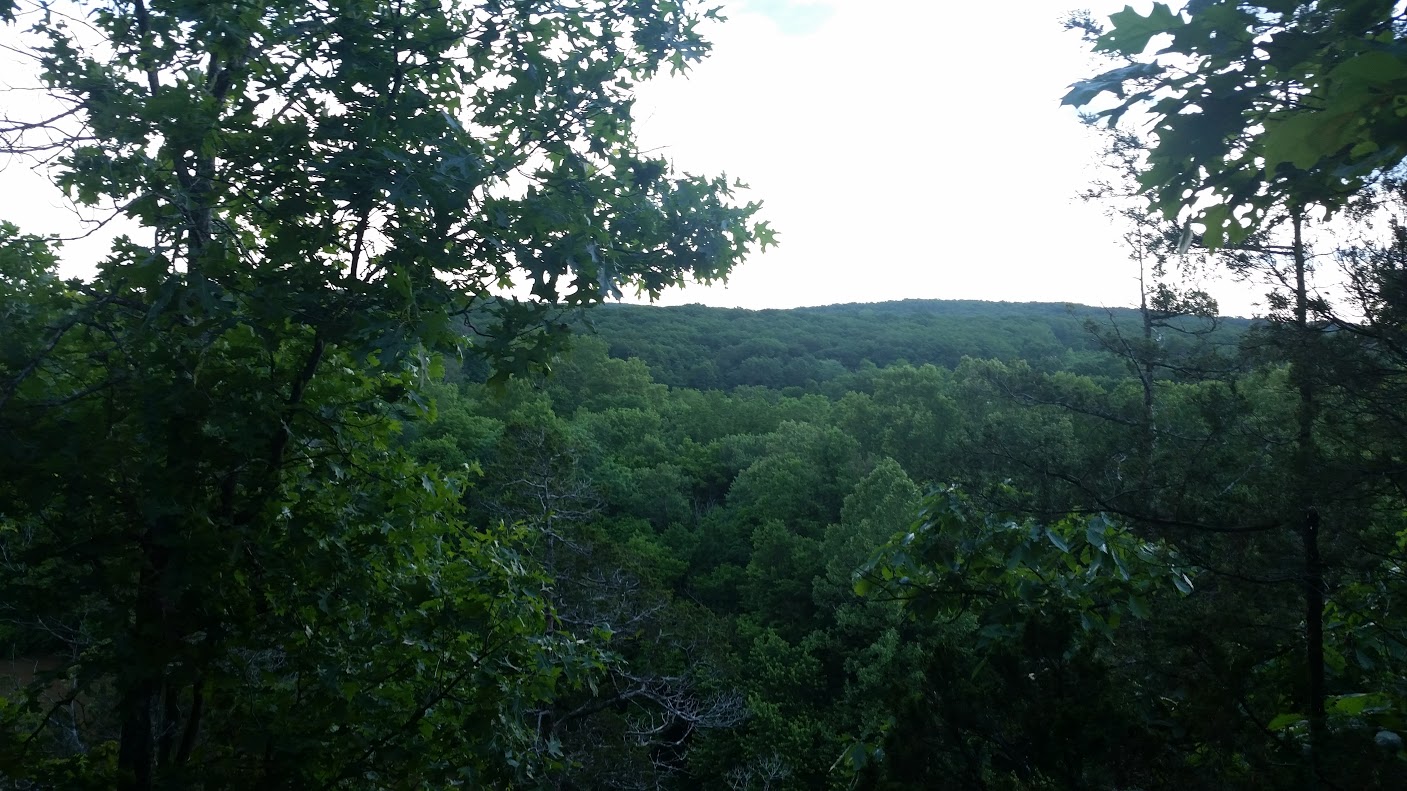 Deer Run Trail starts at the campground and takes you on a loop around the park. The trail is hilly, and can be slippery if the ground and rocks are wet. Most of the trail is dirt, which turns into mud after it rains. The trail takes you up into the bluffs, where you can get some beautiful views of the Meramec River. The loop will also take you past a man-made building, which is the entrace to Cathedral Cave. The trail is a little over two miles long, and will take you about two hours to do.

Oak Ridge Trail and Deer Run Trail each encircle about half of Onondaga Cave State Park, and in the middle, there is a connector that runs between the two. Depending on the weather, you may have to cross some streams without a bridge. In drier weather, the streams can dry out. Oak Ridge Trail is three miles long, and will take you about two and a half hours to complete. Most of the trail is hilly, through a light to medium dense woods. The trail takes you through a dolomite glade. If you’re not familiar with the term, it referrs to a small, prairie-like opening in the middle of the woods, with open grasses and wildflowers. 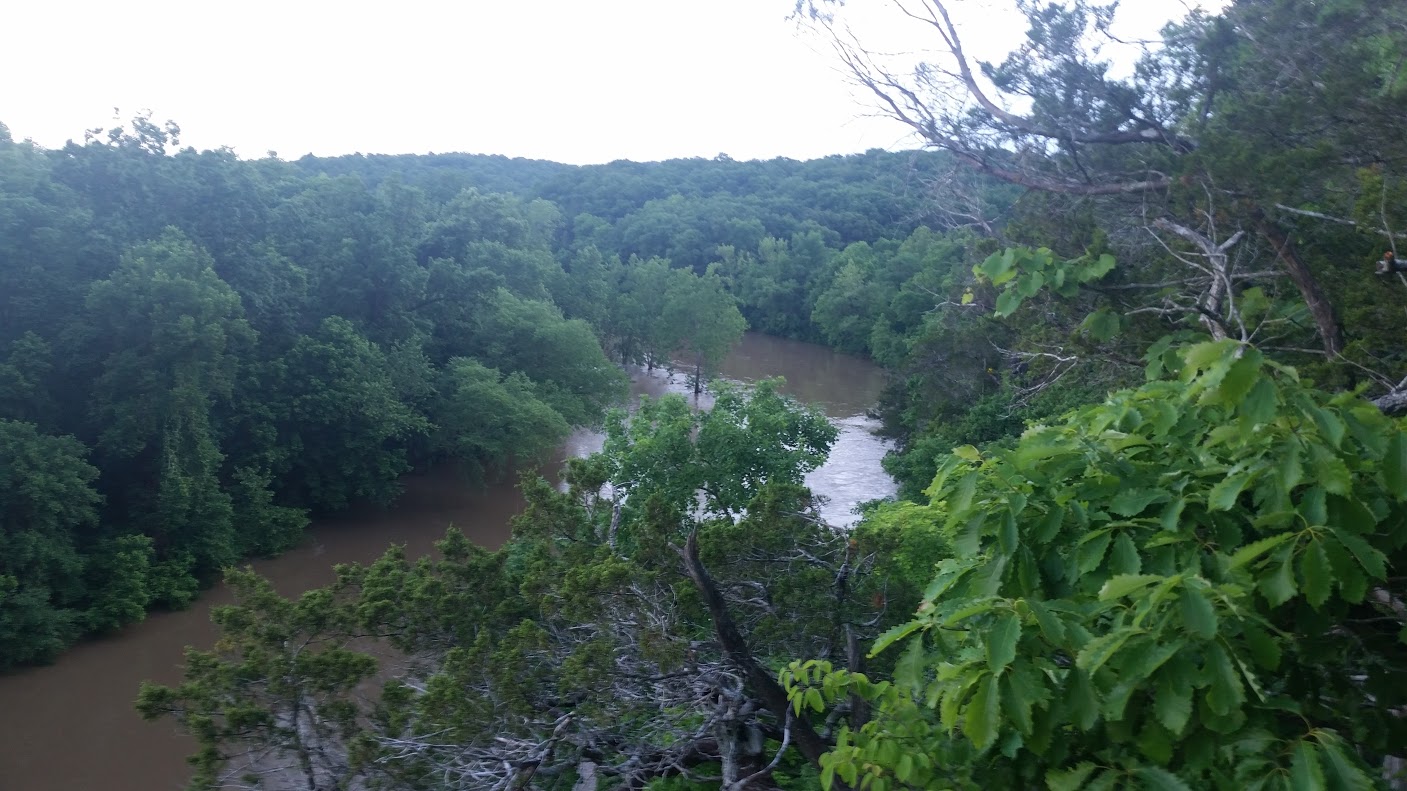 View of Meramec River from Bluffs on Deer Run Trail

The park campground, especially the basic campsites, are located right off the Meramec River. The Meramec River offers fishing for catfish, bluegill, crappie, and smallmouth bass. The visitors center does not sell bait or fishing licenses, so if you plan on fishing during your trip, get your bait and fishing license ahead of time and come prepared. You can also bring a canoe or other boat to the Meramec River and use the boat ramp in Onondaga Cave State Park. The park does not offer canoe rentals, so bring your own or rent one from one of the nearby towns. 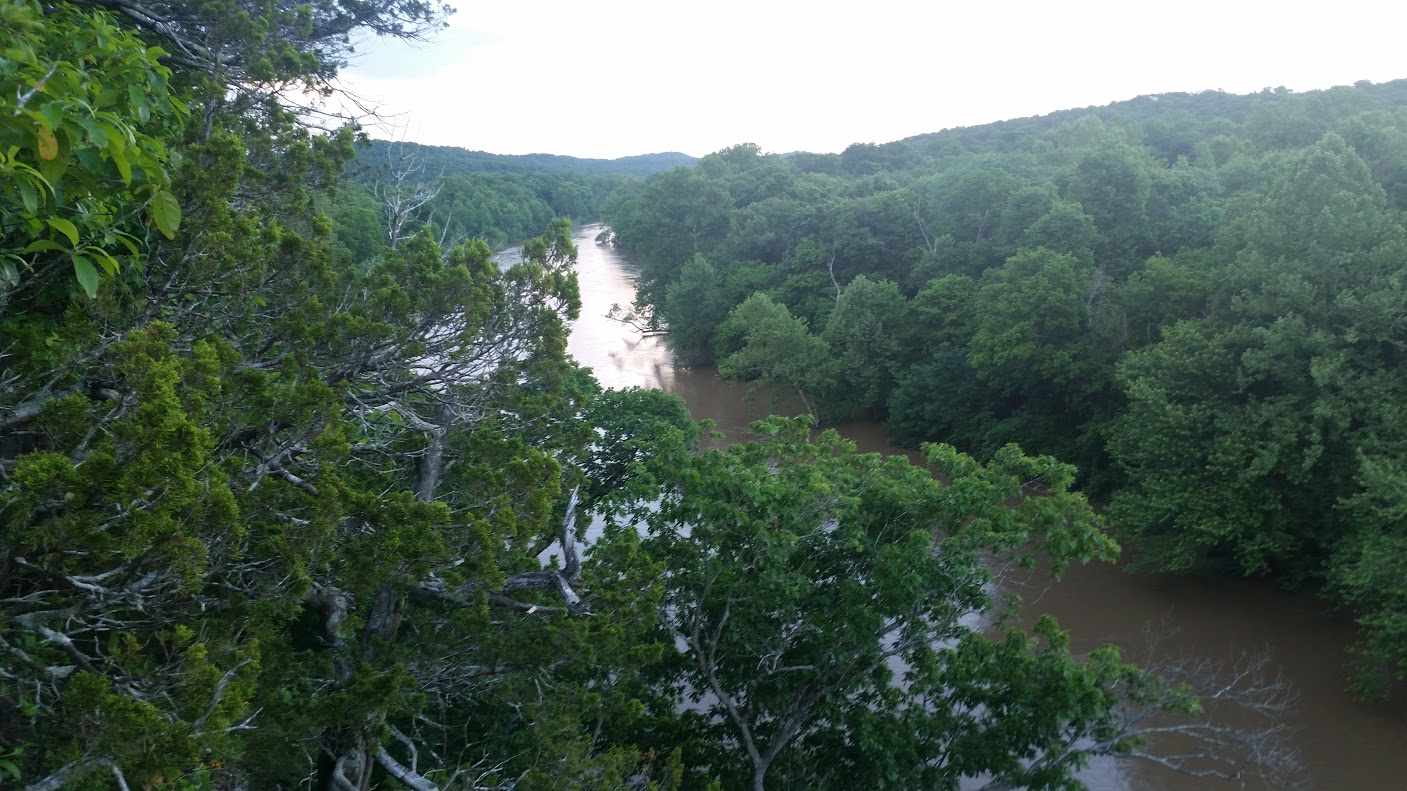 View of Meramec River from Bluffs on Deer Run Trail

The namesake of the park, Onondaga Cave is the most popular attraction of Onondaga Cave State Park. Tours start at the park visitor center, and last about 90 minutes. Tours operate between April 15 and October 15. As this is a popular tour, tour groups fill up, so plan on having some leeway in your day, or call the park ahead of your trip to get better information about the tour schedule. While you are waiting for your tour, check out the visitor center. Although it isn’t big enough to call a museum, there are some interesting displays about the cave and historical Missouri. The cave keeps a constant temperature of 57 degrees, so bring a jacket with you. The tour is easy to go on, with a total walking distance of about 1 mile, on paved walkways with handrails in many locations. The cave is artifically lit, but some areas are darker than others, so bringing a flashlight (or cellphone) is a good idea. One thing to note: even though the cave is lit, cellphone cameras (at least mine) have a hard time focusing in the low light environment. So if taking pictures is important to you, bring a camera with that does well in low light environments. Onondaga Cave is absolutely stunning, with large open areas, and a river flowing through it. 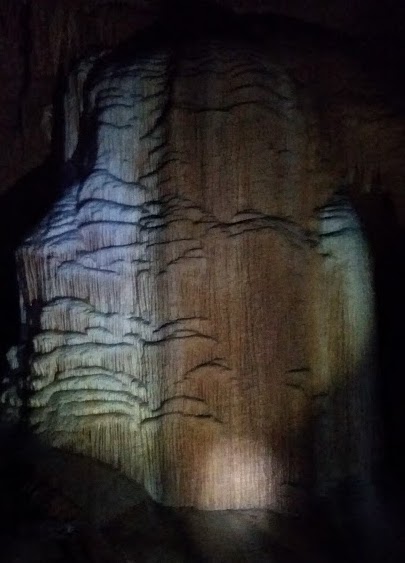 Cathedral Cave is harder to get to than Onondaga Cave. As a result, the tours are smaller, and for me, more enjoyable. The tour starts in the campground. From there, your tour group will hike up part of Deer Run Trail to the enterance of Cathedral Cave. There is no lighting in the cave, so bringing your own flashlight is a must. I would bring an actual flashlight and not just use a cellphone light. The total time for the tour is about two hours, with half an hour of travel time to the cave and back. Depending on your stay, you may be able to do the Cathedral Cave night tour. This tour leaves after dark on Saturdays (don’t count on doing this though, have a back up plan in case the tour is canceled for whatever reason) and in my experience, the group is much smaller. In Cathedral Cave, you can still see some signs that people have been there, including some pavement and light fixtures and pipes, but a little bit into the cave those stop, and it feels more natural than Onondaga. The cave is smaller than Onondaga, and in many places you could touch the ceiling (but don’t!). As you descend into the cave, it opens up to some areas with larger ceilings. At the end of the cave, you descend a winding path back and forth, to the very bottom, where you can see some cool rock formations. This path is slippery though, and it is a steep descent to the bottom. In Cathedral Cave, you will get a chance to see animals that you probably won’t in Onondaga Cave. The tour is slower moving, so you get a chance to take you time and look in the pools of water along the pathway. If you do, you’ll have a chance to see the grotto salamander and many other strange looking animals. 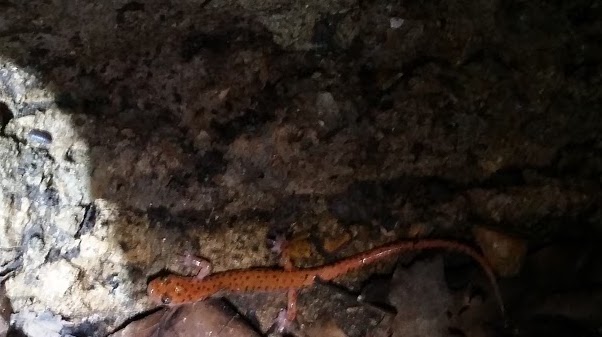 Salamander in entrance to Cathedral Cave.